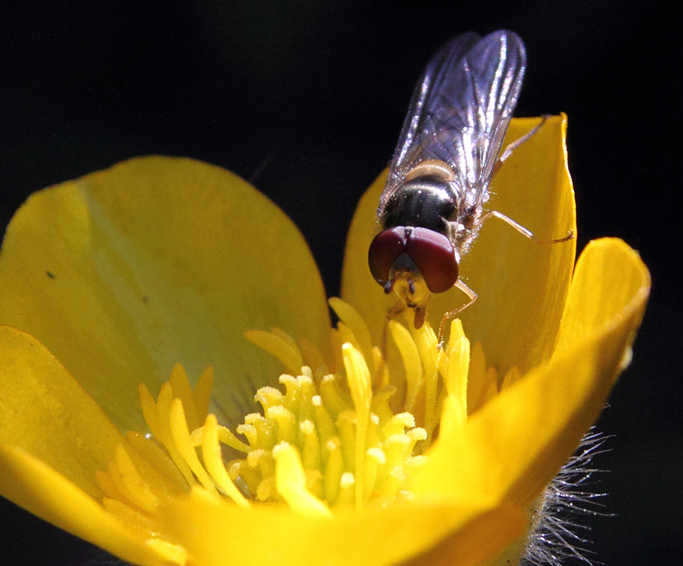 In 2010 Tom Gittings carried out a survery of the flies on the reserve and the results of his survey are presented below. 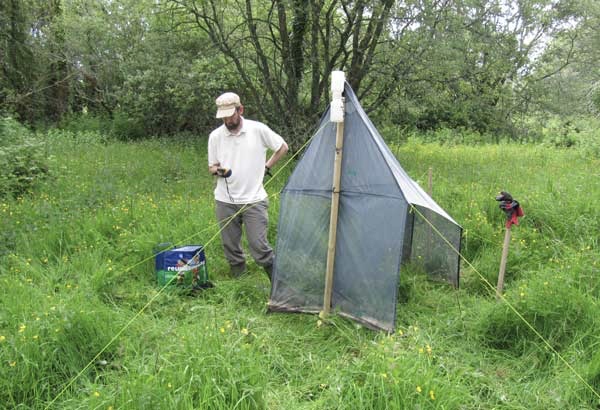 Tom Gittings setting up a Malaise Trap on the reserve in 2010.

This report presents the results of identification of selected dipteran families from Malaise trap samples collected in Cuskinny Nature Reserve in 2010. Additional invertebrate groups have also been extracted from the samples and may be identified at a future date.

The groups covered in this report are hoverflies (Diptera, Syrphidae), snail-killing flies (Diptera, Sciomyzidae) and Larger Brachycera (Diptera). Hoverflies include species with a diverse range of habitat associations and ecological traits, making them good ecological indicators. Snail-killing flies have larvae that are predatory or parasitic on snails or slugs, and are mainly associated with wetland habitats. The Larger Brachycera are a broad group that include a range of families such as soldierflies (Stratiomyiidae) and horseflies (Tabanidae).

Two Malaise traps were installed on 05 June 2010. One trap (Cusk M1) was located in the reedbed at the north-western side of the lake and was run continuously until the end of September 2010. The other trap (Cusk M2) was located nearby, in an open area within alder woodland. This trap was badly damaged during the second trapping interval. Therefore, only two samples were collected from this trap: the first on 28 June 2010 and the second on 25 July 2010.

Faunal analysis
Totals of 13 species of Larger Brachycera, 13 species of sciomyzids and 52 species of syrphids were identified (Appendix 1).
The hoverfly fauna includes a good representation of wetland species. A total of 39 open wetland-associated species and 11 open wetland-specialist species were recorded. This is broadly in line with might be predicted for this level of sampling effort in well-developed wetland habitat(1). However, the sciomyzid fauna was relatively poor compared to what might be predicted for this level of sampling effort in well-developed wetland habitat, and none of the wetland-specialist soldierflies (i.e., Nemotelus, Ondontomyia, Oplodontha, Oxycera and Stratiomys) were recorded.
The representation of woodland fauna was more limited (although some scarce species were recorded; see below), but this reflects the fact that the trap located in the woodland habitat was only fully operational for a short period. Also, the trapping period did not include April/May, which is the peak activity period for some woodland specialists.
Notable species
The hoverfly species recorded included one very rare species (Eupeodes goeldlini), two scarce species (Brachypalpoides lentus and Sphegina elegans) and one habitat vagrant (Sphaerophoria fatarum). Although there is less information available about the overall status and distribution of sciomyzids and Larger Brachycera in Ireland, none of the species of these groups recorded appear to be particularly notable.

(1) In general, the number of species recorded will increase with sampling effort. The volume of the total catch can be used as an index of sampling effort. The volume of the Cuskinny samples would predict a total of 38 wetland-associated species and 12 wetland specialist species, based on a regression equations derived from a survey of 31 wetland sites in Cos. Clare and Galway (Gittings et al., 2009).

Eupeodes goeldlini Mazánek, Láska & Bicík, 1999
One female specimen was recorded in trap M1 during the second trapping period (28 June-25 July 2010). The identification of this specimen has been verified by Dr Martin Speight. This species was first recorded in Ireland from a drained valley bog site in Co. Kildare in 2007 (Speight et al., 2007). It has also been recorded from a rich fen site in Co. Galway (T. Gittings, unpublished). Therefore, the Cuskinny record represents the third known site for this species in Ireland. While it is described as “associated with open areas in humid deciduous forest where small Salix species are present”, the three known Irish sites are all open wetland habitats that are being invaded by scrub, etc.

Brachypalpoides lentus (Meigen, 1822)
One female specimen was recorded in trap M2 during the first trapping period (05-28 June 2010). This is a saproxylic species, associated with overmature oak and beech trees. It is a scarce species in Ireland, where it has been recorded from scattered old woodland sites.

Sphegina elegans (Schummel, 1843)
Two female specimens were recorded in trap M2 during the first trapping period (05-28 June 2010). This is a saproxylic species associated with broad-leaved woodland habitat. It breeds in sap runs on living trees and, therefore, is most likely to occur in old woodlands with overmature trees. It is a scarce species in Ireland

Sphaerophoria fatarum (Goeldlin, 1989)
One male specimen was recorded in trap M1 during the fourth trapping period (01 September 2010). This species is widespread and common in upland areas in Ireland, where it is associated with bog, heath and unimproved wet grassland habitats. Its occurrence at Cuskinny was surprising as neither the habitats within the site, or the landscape around the site would seem to be suitable for the species. This record may represent a dispersing individual. The nearest suitable habitat is probably in the hills east of Watergrasshill around 15 km to the north, illustrating the dispersal ability of syrphids. 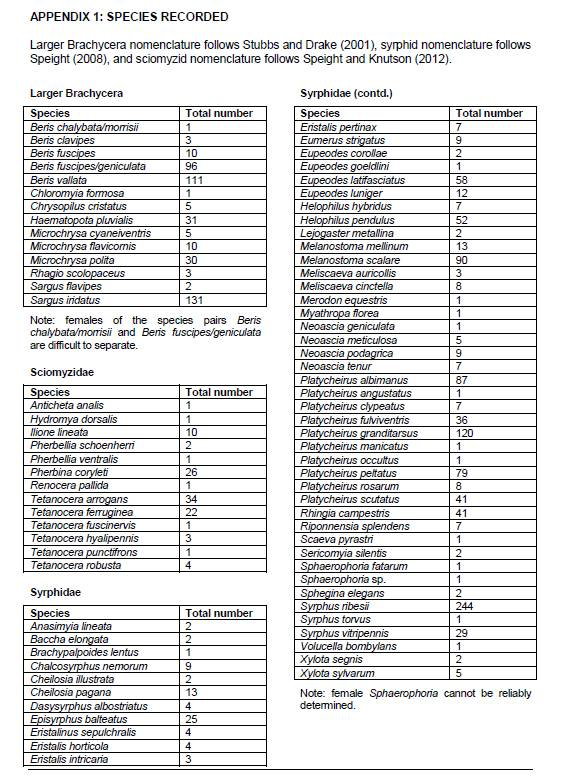 If you have any records of fly species from Cuskinny please send them to: info@cuskinnynaturereserve.com