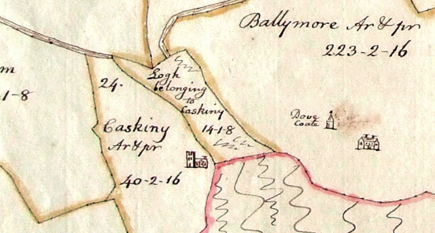 Down Survey Map of Cuskinny 1658 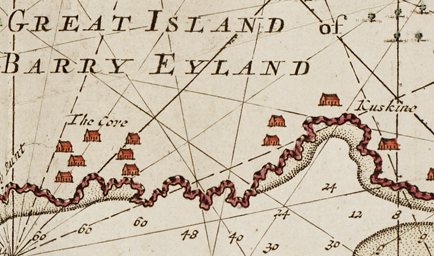 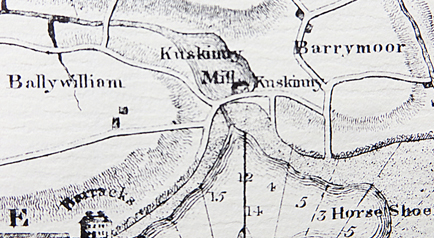 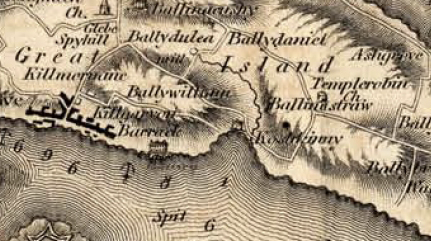 No known archaeological sites (i.e., sites listed in the Sites and Monuments Record for County Cork) occur within the reserve. Fifteen SMR sites occur within a 1 km radius of the reserve:

In the late 1890s a hoard of Roman coins was found at Cuskinny (Day, 1898). These included coins dating from the reigns of Claudius Gothicus (A.D. 278-270), the younger Constatine (A.D. 337), Constantius Chlorus and Constantine the Great. It is generally thought that these were not a hoard from the period of the Roman Empire but most likely from a later time, possibly the 18th or 19th century when it was fashionable to bring roman coins back from Italy.

What’s in a Name

Cuskinny may be an English pronounciation of the old Irish Placename ‘Chois an Thuinge’ which means ‘land about the marsh’. Other Irish names for the area include ‘Cuas Sionnach’ (Glen of the fox) and ‘Cuas Cheannaigh’ (Kenny’s Land). There is a possibility the name may have Viking origin. In the Down Survey of 1656-58 it is called a ‘logh (sic) belonging to Caskiny ‘ and in one 1720 map is called ‘Kuskine’.

The Cork Historical and Archaeological Society (Anon, 1894), refers to mills worked by the Ballyleary Stream at Ballydulea Cross and at Cuskinny, and states that “ in an old map at Rostellan House, Cuskinny Marsh is named the Mill Pond”. However, no indications of any mills are shown on any of the OS maps.

The 1st edition OS map (c. 1841-1845) shows the area of the present lake as fields crossed by transverse drains, described as ‘Liable to Floods’. The course of the Ballyleary River through the Upper Zone of the reserve, shown on this map, appears substantially the same as its present course. The river appears to follow a course parallel to the road through the area of the present lake. The quay is shown on this map, but there is no indication of a sluice. The map does not show any woodland cover within the reserve, apart from a small amount in the extreme south-western corner.

According to information boards at the reserve, in the 1930’s the present lake area was grazed by cattle in summer and some vegetables were also grown, while the reeds were cut for thatching. Following the end of the Second World War, the ditches and sluice were neglected and the lake formed by flooding.

A small section of the reserve has been planted with commercial forestry. Otherwise, the reserve is devoted to nature conservation and educational and amenity uses (see below). In summer, children often collect shrimps and crabs from the southern shore of the lake.

The bay is outside the reserve boundaries, and the boundary of the proposed Natural Heritage Area, and, thus, its present land use is not explicitly for nature conservation. The quay is no longer in use. A small amount of bait digging occurs on an irregular basis with no signs of large scale digging.